We are now into our fifth month here at the BrainFit Kids blog. If you’ve been following along since the beginning you now have a pretty good grasp of the basics that go into creating a well developed and functioning brain. If you’ve been applying those basic concepts with your children you should be seeing some solid results in terms of their development. 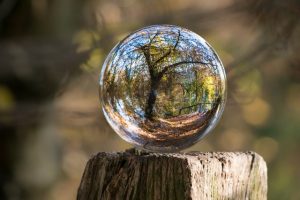 Synergy is defined as the creation of a whole that is greater than the simple sum of its parts.

There is a tendency in the biological and medical sciences to always reduce the whole into its constituent parts. It’s a way of looking at the world that dates to the 16th century and is most commonly known as reductionist thinking or the reductionist paradigm. Most of our modern medical miracles are the result of reductionist thinking. It’s a very useful way of looking at the world. But, it has its problems and it cannot explain everything. 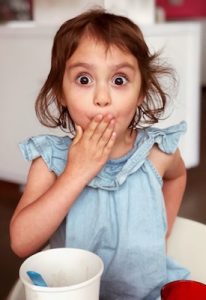 Another way of looking at the world involves seeing how parts relate to one another and influence one another. This is called systems thinking or the systems paradigm. This is how we see the human brain and its development. The human brain is a system unto itself, that is part of the central nervous system, which interacts with and influences other systems (circulatory, digestive, respiratory, etc.), which comprise the human person, who lives in relationship with other human persons, etc., etc.

When thinking about these two seemingly contrarian ways of looking at the world, it is not necessary to reject one in order to embrace the other. Indeed a much fuller understanding of what is actually going on is only achievable when one is able to see the validity of both paradigms. 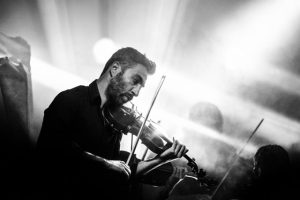 When we apply systems thinking to our understanding of the human brain we see the brain’s parts (medulla, pons, midbrain, cortex) as not merely individual physical structures with unique responsibilities but also as parts of a greater whole that relate to each other, that influence and affect each other, and that, when working smoothly together, provide for a level of performance that is only possible through the relationship that the parts have with each other. It’s a lot like a symphony orchestra!

By this I mean that as the different parts of the brain develop, all of the brain’s functions develop together simultaneously and work together to produce an overall level of ability. Each function influences the development of the others. If you improve one function, all other functions will improve to some extent. The opposite is also true. If a child loses ability in one area, other areas of ability will suffer. This synergy produces an effect that is different from and greater than the sum of the individual effects of each function alone.

So, what does synergy look like in the real world of young children? Imagine a young baby of between 3 and 7 months of age before you. Typically, assuming development is proceeding as it should, this baby will have a certain level of ability in every area of function.

In vision, the baby will have the ability to converge her eyes as she tries to focus them on an object, a face, etc. 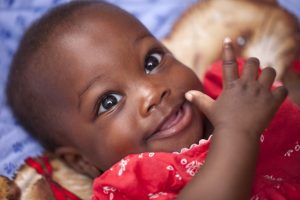 In mobility, the baby will begin to experiment with moving forward in that quadruped position eventually developing the function we call creeping. 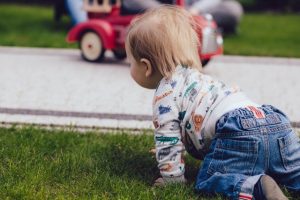 Lastly, in manual ability the baby will now have the ability to reach out with one hand and pick up and object using the whole hand, a function known as prehensile grasp. 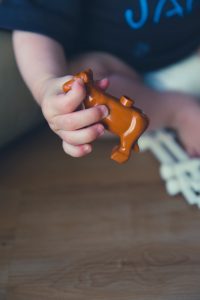 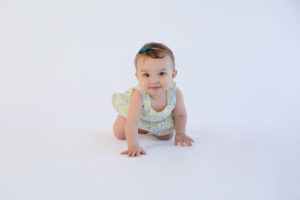 So, imagine this little baby is down on the floor getting some tummy time. She pushes herself up into a quadruped position and holds the position. She then looks at a little piece of lint on the floor a few feet in front of her. She may rock back and forth a few times as she focuses her eyes on the piece of lint. She then looks up and sees her favorite toy on the floor on the other side of the room. She starts to creep towards the toy. All the while she has her eyes focused on the object of her desire. Finally, she reaches the toy and with one hand reaches out and picks it up.

What you just witnessed is synergy in action. You saw the functions of vision, hearing (the auditory mechanism is involved in balance), tactile ability, mobility, and manual ability being performed simultaneously; and all the while this little girl’s midbrain is getting a ton of input and producing a ton of responses (output).

The beauty of this principle is that it gives us lots of clues about what to do when development is not proceeding as we might hope. Consider the function of convergence for example. Typically, children with convergence problems are treated with surgery, glasses, patches, and/or eye exercises. These are all reductionist approaches. When we see a child who has convergence problems we use a systems approach and apply the principle of synergy. Why? Remember, convergence is a function of the midbrain. Children cannot converge their eyes at birth. Their vision is monocular. They begin to develop convergence and binocular vision when their midbrain starts to develop. So, rather than focus our efforts on the eyes, we focus on the brain. Makes sense since that’s where the problem is. Specifically, we have the child creep, creep, and creep some more. Over the years, we have completely solved convergence problems in many children who were slated for surgery for strabismus (crossed eyes), just by having them creep… which is to say just by developing their midbrains!

Go ahead and watch some synergy in action! It’s a beautiful thing!