In our first blog post about the science of brain development, we established  that the brain grows through use. You will remember that, just like with muscles, it does so because it is subject to a very basic law of nature that says that function determines structure. 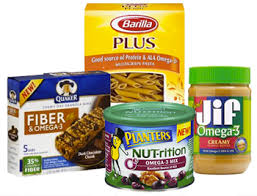 When we say that the brain grows through use, we are saying that its physical structure actually changes in the form of new neurons, new dendrites, new synapses, and… new, critically important, myelin.

Well, now you know. It’s because science has proven that omega-3 fatty acids are important for your heart and your brain. That’s right, fat (the right kind of fat) is good for the heart and the brain. Indeed, not only is fat good for your heart and brain, it’s essential! Oh, and you don’t actually need to buy foods “enriched” with omega-3’s in order to get what you need… but that’s another story.

Myelin is critically important because it serves as a conductor of electrical impulses. Neurons connect to each other via a structure called the axon. Myelin covers the axon of each neuron in layers. You can see it in the drawing below labeled as the myelin sheath. Every time a neural circuit is fired, more myelin wraps around the axon on that circuit. The more myelin you have the faster information can travel from one neuron to the next.

Broadband internet allows a quantum leap in the efficiency of the internet communication system. The same thing happens in the brain when there is plenty of myelin. It creates a neurological superhighway built for speed. 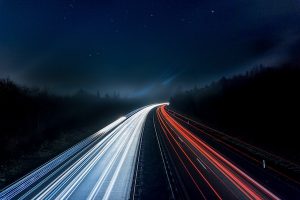 The answer lies in the second law that governs brain development, a basic law of neurology that says: in order to increase the transmission of nerve impulses across the central nervous system, you must increase the stimulus in frequency, intensity, and duration.

One more time… in order to increase the transmission of nerve impulses across the central nervous system, you must increase the stimulus in frequency, intensity, and duration.

First, let’s break that down and translate it into easy to understand concepts.

Again, the second law of brain development says: in order to increase the transmission of nerve impulses across the central nervous system, you must increase the stimulus in frequency, intensity, and duration. Yep, you’re right… that’s frequency!

Here’s how it works. Remember that all information coming into the brain does so in the form of electrical energy. In order for a message to register in the brain, its electrical energy must reach a certain threshold, known as the action potential. Without getting too complicated, the action potential is part of the process that occurs during the firing of a neuron. Either the threshold necessary for firing the neuron (the action potential) is reached or it is not. This is known as the all or none law. We can ensure that the threshold is reached by paying attention to the frequency, intensity, and duration of the stimulus.

We apply the second law of brain development in a number of ways. As a general rule, when the brain is immature (either because the child is young or the brain has been injured and is therefore not developed) we place more importance on the frequency and intensity of an activity, and the duration is kept short. As the brain matures we shift the emphasis and, over time, the frequency and intensity will decrease as the duration increases. Specifically, with regard to duration, imagine reading a book to a six month old versus a four year old. The six month old will listen attentively for a short while but soon enough she is interested in other things. Whereas, the four year old will sit for the entire book and then ask you to read it again, or read another, and then another, and then… you get the idea!

We use this principle every day in our work with children and young adults who have developmental and functional difficulties due to brain-injury or poor brain development. When brain function is compromised by injury there is a barrier of sorts that forms between the brain and the environment thus making it much more difficult to reach the threshold necessary for triggering the action potential to fire neurons. For this reason, the normal amounts of stimulation (which are quite adequate to develop a well functioning brain) are entirely inadequate for developing the injured brain. If this were not so then the problems of children who struggle would be solved very easily.

However, by applying this basic law of brain development carefully, we can accelerate development in the brain, often enabling the child to overcome the effects of their original injury or poor development and develop functions that previously were impossible. This is one of the reasons that there is always hope for children who have difficulties in development. The possibility of growth is built into the system!

My wife is from Brazil so I particularly like Coyle’s examination of the reasons behind the astounding proliferation of talented soccer players from Brazil. Essentially it boils down to how Brazilians introduce the sport to children when they are young, the effect this has on the development of their young brains, and the level of skill they develop as a result.

Brazilian children never actually play on a real soccer field until they are in their early teens. When they are learning the game they play in a much more confined space, often indoors. It’s a game the Brazilians call futsal, which is short for futebol de salão (indoor soccer).

Learning to play the game in a confined space has several very important results. First, because the space is confined, the number of players is reduced from eleven to five. That means that each player gets the opportunity to handle the ball far more often. In other words, with increased frequency! That’s a surefire way to develop better skill. Second, because the space is confined the ball moves between players much faster and much more often. In other words, with increased intensity! A great way to develop the ability to control the ball and pass it under pressure. Third, because there are unlimited substitutions allowed, each player plays for a shorter duration of time which is more appropriate for their age and level of neurological development. All of this adds up to the development of a lot of soccer players of extraordinary talent. 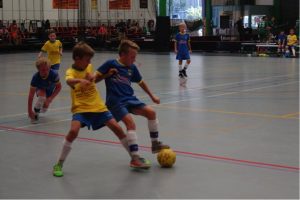 Neymar Jr., one of the current group of Brazilian greats had this to say about futsal, “Futsal had a massive influence on me when I was growing up. It’s a very demanding game and it really helped to develop my technique, speed of thought, and ability to perform moves in tight spaces. I think futsal is a fundamental part of a footballer’s life.”

Does this mean that every child who plays futsal grows up to be a soccer superstar? Not at all. There is a difference between having talent and having superstar talent. And that is where things like passion, individual motivation, discipline, coaching, etc. come into play. But becoming a superstar in any endeavor, especially in childhood, isn’t the objective. At least it shouldn’t be the objective. It’s certainly not our objective. Our objective is to give children the opportunity to develop to their full potential whatever that might be. We do that by ensuring that their brains are well developed and functioning well. We’re happy to let them decide where that leads them!

One last thing. Now that you’ve focused your attention on this science stuff for a while, give yourself a break and enjoy watching this video of Neymar Jr.. It covers his career from the time he was a kid playing futsal to his present day professional career playing for the best soccer clubs of Europe and as the captain of the Brazilian national team. It’s a beautiful illustration of how that talent developed in childhood combined with all of those intangible ingredients (passion, individual motivation, discipline, coaching) can produce poetry in motion on the soccer field.