get that baby moving

One of the most interesting and amazing characteristics of the human brain is its ability to recognize patterns.

Patterns are readily observable throughout the natural world and the human brain is an absolute master at recognizing them. 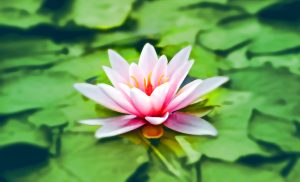 We do this primarily with our sensory functions of vision, hearing, tactile ability, taste, and smell.

What is fascinating is that we also move in patterns. When we observe babies carefully as they develop mobility, we see clear patterns emerge during each stage as the brain develops and they learn more about their bodies and movement.

In the beginning, movement is random and without any real purpose. It is the result of reflexes being triggered and the baby’s body responding. Gradually however, with sufficient opportunity and as a result of thousands of experiments (remember frequency?), children integrate those reflexes and learn that by moving their arms and legs in certain ways they can move more effectively and efficiently. Nobody teaches the baby how to do this. It is hard wired into the system. When we give a young child frequent opportunity to learn how to use their arms and legs; when we give them that opportunity without restrictions; and when we keep the duration of those opportunities just right; the process plays out exactly as it is designed. 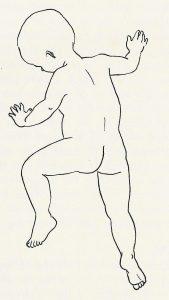 If you pay careful attention to how your baby is moving, you will observe  several distinct patterns of movement as he learns how to move. You will see at least some of these patterns at the crawling stage, at the creeping stage, and at the walking stage. There are four distinct patterns of movement that children will use. They are the truncal pattern, the homologous pattern, the homolateral pattern, and the cross pattern. Let’s take a look at each of them.

The truncal pattern involves very simple movement, flexion and extension of the trunk. This is how the baby moves in utero during fetal development. When Mom feels her baby “kicking”, she is feeling the baby move from flexion in to extension. It is a very primitive pattern of movement, the kind of movement that we can observe in the fish.  In both the fish and the newborn baby, it requires the presence of a well-functioning medulla and spinal cord, the parts of the central nervous system that are fully functional at birth.

The homologous pattern involves extending both arms simultaneously to pull forward followed by flexing both legs simultaneously to then push backward. The result is forward movement. This is often how the baby will begin to crawl forward on the tummy. Sometimes it also makes baby go backwards for a time if the arms are used more than the legs! This is the kind of movement that we can observe in primitive amphibians like the frog and, in both the frog and the newborn baby, it requires the presence of a well-functioning pons, medulla, and spinal cord. 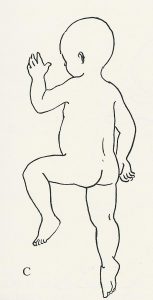 The homolateral pattern involves moving the arm and leg on the same side of the body simultaneously. Compared to the homologous pattern, this is a more effective and powerful pattern of movement for tummy crawling. This is the kind of movement that we can observe in the higher amphibians like the salamander and newt and it requires the presence of a well-functioning pons, medulla, and spinal cord. 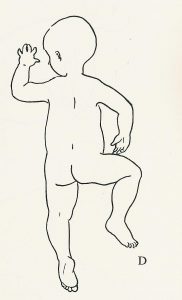 The cross pattern involves moving the opposite arm and leg simultaneously. This pattern of movement is much more complex than the previous patterns and, although not as powerful as the homolateral pattern, it is much more efficient. The cross pattern is the pattern of movement we can observe in reptiles and mammals and requires the presence of a well-functioning midbrain, pons, medulla. and spinal cord.

The journey through these patterns of movement can be observed in babies at each and every stage (tummy crawling, creeping on hands and knees, walking, and running) in the development of mobility as the brain moves from function that is primitive and simple to function that is sophisticated and complex. These patterns are deeply ingrained in the human brain’s wiring as a result of the many millions of years it has taken for the human central nervous system to develop to its present state. They are essential for the full development of the brain because they serve the very important purpose of organizing the central nervous system, a process called “neurological organization”. All human functional ability is dependent on neurological organization.

It bears repeating that, obviously, in order for these movement patterns to be expressed the baby must be given the opportunity to move. A baby cannot learn how to move correctly, cannot develop through these patterns of movement, when she is lying on her back, strapped in a chair, or sitting in a swing. Only when placed in a functional position (i.e. prone, which is to say on her tummy) and given the freedom to move without any restrictions, and with the frequency, intensity, and duration appropriate for her age, can she fully express her physical potential.

What pattern is your baby using when he crawls, creeps, or walks?

Take the time to be a careful observer of your child’s development… you’ll be amazed because it truly is a miracle!