Today we are delighted to feature another guest post, this time by our dear friend and colleague, Gail Engebretson. We’ve known Gail for more than forty years. She taught Juliana how to play the violin and worked with us in France for many years. She’s really part of the family. Gail probably has more hands-on knowledge and practical experience teaching music to children and using music to develop the brain than just about anyone on the planet. 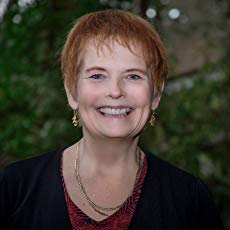 Gail Engebretson graduated from the University of Wisconsin in 1974 with a BA in Music Education. She received special training in the Suzuki violin method and studied with Dr. Shinichi Suzuki in Japan. In 1976, Gail began training in Human Development at the Institutes for the Achievement of Human Potential in Philadelphia. There she designed music programs for young children and babies. Gail later developed music and violin programs in California, Wisconsin, and Washington. She currently lives in the Seattle area where she teaches music and violin to a bunch of really lucky kids. Gail also volunteers her time in an after-school string program in a native American community. In addition to her music and teaching career, Gail is a life coach and a published author.

Gail can be found at gailviolin@gmail.com and fatnomorelifestyle.com. Her novel, Polish Princess, is available on amazon.com.

What does music have to do with brain development?

Many people believe music, musical instruction and learning an instrument are nice but not very important – certainly not something crucial in a child’s development or critical to maintain in our school’s curriculums. But most people have not considered music as a way to enhance brain development in a child. 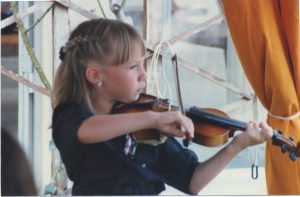 Music is a language, a very complex language. Music has pitch and tone and rhythm. It has texture and form. Learning to play a musical instrument requires fine-tuned listening skills, spatial awareness, tactile awareness, manual dexterity, and physical coordination.

The brain is made up of billions of neurons and as these neurons become stimulated they make new connections – synapses. If they receive stimulation and are used they become stronger. If they are not used, they die.

One of the three main pathways into the brain is the auditory pathway. This pathway is strengthened and grown every time a child listens to music. Listening to classical music, which has a more complex musical structure, uses even more neurons and creates more connections in the developing brain.

There have been numerous studies done in recent years about music and the impact it has on children’s mental, physical and even psychological growth.

When the brain is processing music, both the right and left hemispheres of the brain light up. It shows activity in the auditory, visual, cognitive, spatial and motor systems of the brain.  Research has shown that classical music primes the brain to solve spatial problems faster. Children with music training have scored better in math and verbal skills.

Stimulating the brain through music enables a child to have better listening skills. They are able to differentiate pitches and sounds. This helps in language development and later, reading development. Even a little bit of music training can make a difference in a child’s listening abilities later in life.

So what can you do as a parent to enhance your child’s brain development using music? Here are eight simple but powerful suggestions: 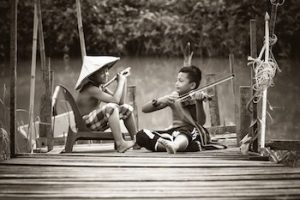 It’s very important to keep all music activities fun and enjoyable for your child. Music is a wonderful thing when it’s not being forced on a child. Many of us have gone through music lessons that became excruciating. Keep the bigger picture in mind – you’re not out to make master musicians but rather, happy, smart and capable children.